Nope, not joking. Not wordplaying. We had a bad carcrash back in Andalusia and it wasn’t what I would call a funny anecdote. But before you start worrying: we must have had some sort of guardian-something because although the car was a write-off after the accident, we climbed out without a scratch.

END_OF_DOCUMENT_TOKEN_TO_BE_REPLACED

Wow! We have only seen recently that Jack Wolfskin chose one of our shots from Val Grande for their front page!! In fact, it’s the FIRST video they show! What an honour 🙂

A screenshot of the front page. We captured this stunning view from the Alpe la Colma (1,726m above sea level). Read here about the wet hike up there.

And then, only a couple of days later, we saw the same ad on facebook. It feels REALLY weird when you suddenly see your own footage popping up on your timeline. Technically, more than 700,000 people have by now seen one of our travel videos – even if it’s only these 2 seconds. Crazy.

Sebastian was bored the other day and quickly edited a clip about a recent daytrip to Zossen. I had just handed in my Bachelor’s Thesis so he made me this thoughtful gift of multiple, painful face dives… Just kidding, I really enjoyed it and would love to do it again soon! Wakeboarding and Kitesurfing have a huge potential to become a new, addictive hobby…

A big thanks to our friend Robin who took us along and showed us the ropes!! Much appreciated!

Theo in his favorite chair.

His name is Theo.

Theo deeply impressed us and made our stay on his farm in Andalusia as memorable as it was. Let’s say he truly was that extra pinch of cinnamon in our morning porridge. That extra dab of cream on top of a warm apple crumble. That extra … ah never mind, I guess you know where I’m going with this. Keep reading to learn more about our stay with him and be fascinated…

Theo was born in Belgium but has been living in the South of Spain for more than 40 years by now. His life story contains a trillion of bends, peaks and dips which we won’t mention in detail. But as always, his childhood laid the foundations for his eventful biography: He inherited priceless skills from his parents. His father owned a successful, internationally operating picture frame factory and little Theo had been playing between the machines since he could walk. Later, he led the company himself and had by then perfectionated many working skills. All the buildings you see on the pictures – he built himself.  All the plants you walk past in his huge gardens – he planted himself. And that’s due to the fact that his mother led a very different lifestyle than his father: After their divorce, she bought land in Spain and taught her son how to plough, plant, harvest as well as how to work with animals such a donkeys, horses and dogs.

We spend almost every evening with Theo and couldn’t get enough of his anecdotes. He is as cheeky as he is smart. As quick-tempered as he is gentle. As stubborn as he is generous. A true character.

Theo owns a whole mountain. Not kidding. His property is located close to the village “Cortes de la Frontera” and encompasses about 450hectars. Even after 10 days there, we did not see all corners of this vast area. There are about 5 uninhabited houses which are mainly used for storage. Theo himself lives in a construction site. Although his gorgeous pool and the ground floor are ready, the second floor and the upper tower (yes, a tower) remain unfinished. It was a true adventure in itself to climb up those steps! 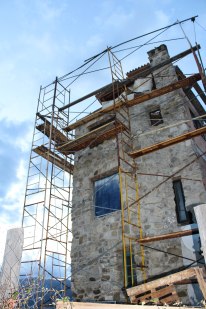 Then, there are two huge gardens out of which he only tends one at the moment. There, he grows so many fruits and vegetables that you can’t help but think of Eden: Apples, pears, peaches, pomegranates, figs, grapes! Cauliflowers, broccoli, carrots, cabbage, corn, potatoes, pumpkins, tomatoes, courgettes! Plus, many flowers, herbs and medical plants. He cultivates them all in permaculture and only uses his self-made hummus as fertilizer. Only seldom, he sells some boxes of his harvest for cheap or gives them away to neighbours. The rest, he eats himself or feeds to his animals. According to his own opinion, the gardens give him a hell lot of work but even more pleasure. And we felt the same: More than once, we (voluntarily) helped him to water, plant and plough and shed more than a few litres of sweat in the process. But it is satisfying work and just as I have loved the months of farm work back in Australia, I’ve loved it in Andalusia.

At the moment, he shares the huge area with 16 horses, 8 cats, 5 dogs, 4 pigs, 1 mule and 1 donkey. Then, there are some scorpions, snakes, spiders and a variety of bugs. Most of the animals roam freely through the land, only the gardens and the outer borders are fenced. And that’s just a momentary count, the number has variated greatly over the years…. Personally, we want to put the focus on the horses because we ended up taking care of them and even mounting these beauties without saddles – true Western style. But before we could ride for the first time, we first had to catch them.

“Say what? Didn’t you just write that they live on the farm?”

Um, technically, yes. But they are too much work for Theo at the moment which is why he prefers to let them roam freely through the surrounding lands. The majority of the neighbours is fine with it, the state does not care at all and the area is so remote that the chance of them striding over a highway is like 0%. So, we had to get them back onto the farm first. To make a long story short: Theo caught the leading mare of a group of six horses, put the string in my hands and waved goodbye. We then led the herd a few kilometers back to the farm and spend the next few days cleaning saddles and bridles and finally riding them. Theo barely supervised us and fully trusted my knowledge – something that would NEVER happen to you in Germany. Already on our second ride, we went without saddles (brave Sebastian!). It was an amazing experience and I can’t wait to come back and work more with these beauties. 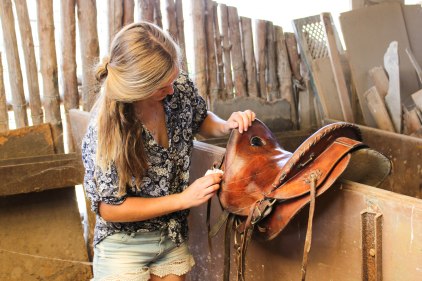 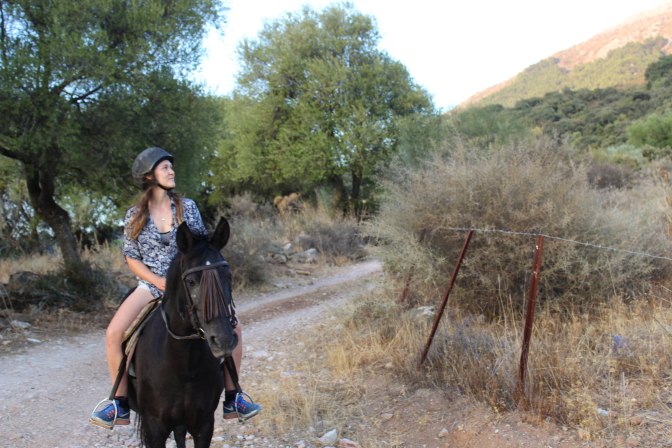 We are happy to provide Theo’s contact details if you are interested to get in touch with him. Be prepared to work hard and sweat harder (in return for food and accommodation). It’ll be worth it though: Priceless scenery, soul-satisfying work with animals and plants, endless life lessons and the chance to meet one of the most fascinating characters we ever crossed paths with. As for ourselves: We already pinkie-promised to come back with more time on our hands… Fare well, Theo!