So here we were: Heartbroken from our recent realisation that we could not provide a suitable home for a dog like Freya, a rescue who needed a calm environment and patient re-socialization more than anything. Despite all our efforts, all our love, we couldn’t provide what she needed and had to return her to the shelter. We miss her every day and are happy to report that she was re-adopted last month.

Despite our heavy hearts, we were excited about our friend Felix’ visit who came all the way from Munich to travel with us for 3 weeks and who did an excellent job at comforting us and cheering us up with his dark and oftentimes incredibly blunt humour. Initially, we had planned to travel the Chilcotin area and the famous Banff and Jasper Nationalpark with him, yet, we had to change our travel plans drastically…

Wildfires were roaring all over BC at that point. 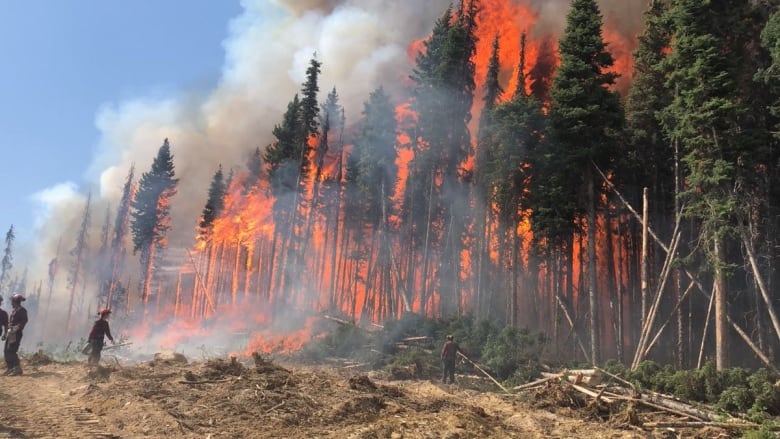 It’s not like we hadn’t heard of them or hadn’t checked their location before leaving Quadra. However, we had totally underestimated how far the smoke would travel and didn’t even know that there was something like a wildfire smoke forecast in Canada. For numerous days, we were stuck in yellowish-grey smog, our eyes teared up, our throats got sore and we didn’t see any of these beautiful mountains that were supposed to surround us. If only we had stayed on Vanisland… The smoke barely stood a chance against the seabreeze there.

We could barely see the mountains surrounding us…

We tried to make the most of our situation which mainly ment to avoid the smoke as much as possible by staying low and changing our route. Former hiking trips changed into days at local swimming pools and beers at pool tables, snowy peak ambitions became valley strolls and we really had the best views when we explored rocky gorges, lakes and waterfalls instead of mountain ridges with “panoramic” – at that point nonexisting – views. On some days, the wind cleared much of the smoke and we could actually catch glimpses of that famous, Canadian landscape. On other days, we could hardly tell if a moose or another car was approaching us on the highway…

Despite the smoke and all that plan-changing, we still had a great, adventurous time with lots of laughter and quality time. Plans are nothing, but planning is everything. In fact, we were quite sad when we had to bring Felix to the airport. Nontheless, we were also excited for our next and final destination: ALASKA.

Off to new shores!

What a beautiful view. Our campspot for the night was right where we took this picture…

Banff Nationalpark, only a little smoky that day…

Once you leave the carpark behind, you will barely meet other hikers in “grizzly country”.

With the last sunrays, we reached our campsite at a lake for the night…

Lake Louise is one of Canada’s top attractions. We didn’t like it. It was smoky as hell that day (it’s not a black&white picture!!) and…

… the huge crowds of tourists at Lake Louise were insane!! Note the two chicks who probably end up pretending on their photo that they were at this mountain lake aaaall by themselves…

We prefered more remote areas, sometime we had them all to ourselves

Time for a round of Backgammon!

Felix’ spot for the night.

Of course, we use fully degradable products! Refreshing, icecold river shower in the morning!

Sometimes, going off the beaten path is so worth it. This was one of our best hikes.

And way down we go…

It ended at a beautiful waterfall.

It would have been rude NOT to go skinnydipping!

Perfect ending to a gorgeous trip…

Bye, Felix! We were sad when we brought you to the airport.

Last but not least, we’d like to emphasize that wildfires are nothing out of the ordinary in BC. They happen every single year. In fact, many ecosystems rely on the recurring flames and controlled burning was induced by some indigenous groups. BUT! The fact that the average number of wildfires is increasing so drastically is not normal. This is a result of the modern logging industry and, probably even more important, climate change which brought hotter, dryer summers. This year’s summer wasn’t only crazy hot in Europe 😉 Even on Quadra, an island with a cooler sea climate, we didn’t get any rain for many weeks! And it’s not careless campers who cause the majority of wildfires but lightning. Late summer thunderstorms become more frequent and mightier each year and oftentimes, they occur without a single drop of rain. An explosive combination… Friends told us they witnessed trees going up in flames in mere seconds. Like sparklers.

Wildfires and smoke distribution over North America on August 20, 2018.

The province was in a state of emergency for weeks, 65,000 people had to get evacuated. Highways were blocked, flights cancelled, schools closed. In total, almost 2,000 individual fires burned over the province and more in other regions of Canada. That’s no coincidence. When is humankind finally taking responsibilty?

P.S.: Tidbit for the seriously interested amongst you. Here’s a TED talk about wildfires: